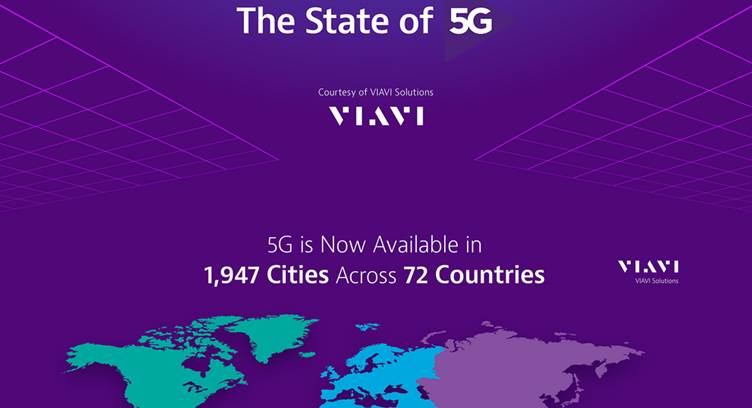 Despite the pandemic, 5G cities came online at a rate of nearly two per day, with the addition of 635 new 5G cities in 2021, according to the new VIAVI report “The State of 5G,” now in its sixth year.

By the end of January 2022, 72 countries had 5G networks in place, with the newest crop of 5G countries comprising Argentina, Bhutan, Kenya, Kazakhstan, Malaysia, Malta and Mauritius, which all came online in the second half of 2021. Europe, Middle East & Africa (EMEA) has overtaken Asia Pacific including Greater China (APAC) to become the region with the most 5G cities at 839. APAC has 689 5G cities and the Americas has 419.

Not surprisingly, the world’s two largest economies, the United States and China are the countries with the most 5G cities. China now has 356 5G cities and the United States has 296. The Philippines remained in the third spot globally with a total of 98 5G cities.

Currently, most 5G networks deployed are Non-Standalone (NSA) networks, meaning that 5G equipment is added to existing 4G network infrastructure. There are currently 24 Standalone (SA) 5G networks globally, meaning that they have been built using a new 5G core network. It is widely considered that many of the next-generation use cases and monetization models associated with 5G, beyond enhanced Mobile Broadband (eMBB) will only be possible when Standalone 5G networks built on new 5G core networks are in place.

The State of 5G also highlights the growing Open RAN ecosystem, combining mobile operators as well as software and infrastructure vendors, seeking to develop an open, virtualized Radio Access Network (RAN) with embedded Artificial Intelligence (AI) control. As of March 2022, 64 operators have publicly announced their participation in the development of Open RAN networks. This breaks down to 23 live deployments of Open RAN networks, 34 in the trial phase with a further seven operators that have publicly announced they are in the pre-trial phase.

Sameh Yamany, CTO, VIAVI Solutions
What comes next in 5G is the reinforcement of networks. This will take a couple of forms. Firstly, we expect to see more Standalone 5G networks, which will deliver on much of the promise of 5G, both for the operator and for the wider ecosystem of users. And secondly, we expect to see Open RAN continue its rapid development and start to become a de facto standard. VIAVI will continue to play a central role in testing those new networks as they are built and expanded.