5G Is Still Coming Despite Covid-19. These Are the Stocks Set to Benefit First 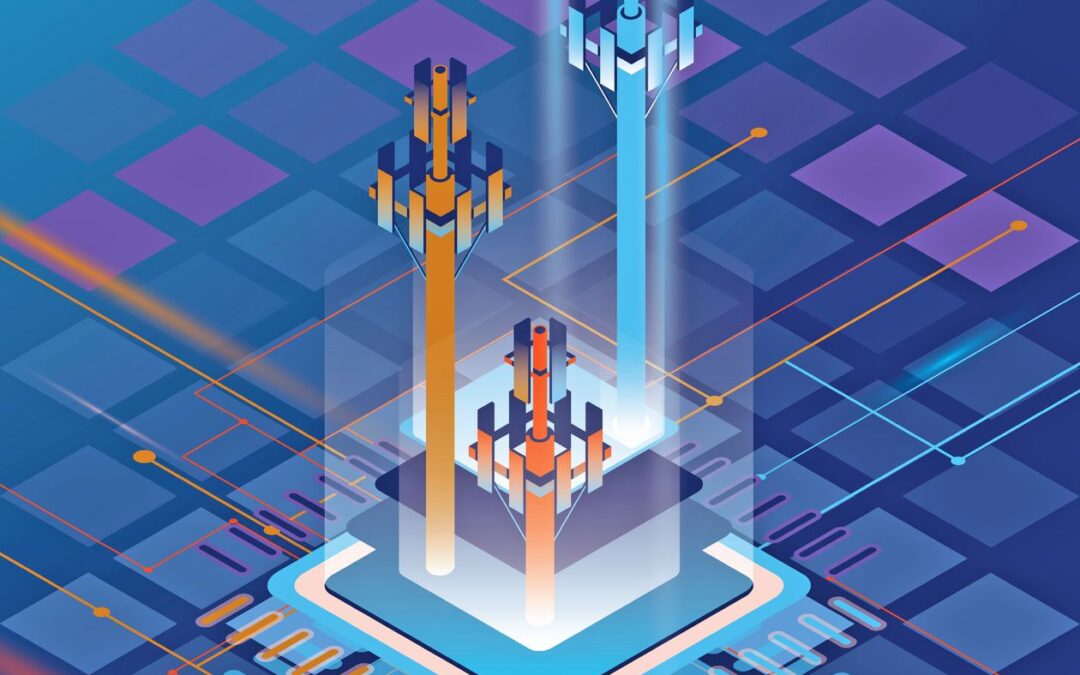 In the coming months, U.S. consumers will face a barrage of advertising for fifth-generation, or 5G, networks and shiny new phones. Verizon Communications promises ultrafast speeds and massive capacity. “It will change everything,” the carrier says. At AT&T, 5G is “transforming the future.”

But investors betting on 5G should temper their expectations. The rollout will be more evolution than revolution, delaying potential rewards for Verizon (ticker: VZ) and AT&T (T)—and consumers. For years to come, 5G networks will coexist with the current 4G LTE networks. And the speeds could be limited as the complex networks are built.

“The value proposition for a smartphone customer to upgrade to 5G just isn’t remotely there yet, and it won’t be there for a very long time,” says veteran telecom analyst Craig Moffett of MoffettNathanson.

The new technology will eventually allow 4K movie downloads in seconds, virtual and augmented reality on the go, and remote surgeries, all while connecting millions of devices that could create smart cities, factories, and transportation networks.

But big ideas don’t always translate to larger profits. Here, the prior 4G rollout offers lessons for investors. While smartphone sales and data usage soared with 4G, the average revenue per wireless subscriber has actually declined over the past decade, according to Moffett. Instead, much of 4G’s value has accrued to businesses such as Uber Technologies (UBER) and Snap (SNAP), which didn’t exist a decade ago.

“There’s always an element of faith,” says Raymond James analyst Simon Leopold. “If I knew the next great business case based on 5G, I would quit my job and go do that.”

To find 5G beneficiaries, investors will have to think outside the box. The good news is there are existing stocks poised to benefit. Here’s where to look:

In the near term, the best way to play the 5G rush is not through the wireless carriers, but rather the universe of firms earning their 5G investments.

“We think of these as arms merchants to the combatants,” says Leopold. “There is a significant complex of companies involved in 5G beyond the most obvious players.”

Nokia has had its share of performance missteps in recent years, beginning with its $17 billion acquisition of Alcatel-Lucent. Integration was a challenge, and Nokia has burned more than $6 billion in restructuring charges and postmerger adjustments. The distraction also allowed Ericsson to seize the lead on the 5G technology front, according to Leopold, and Nokia has lost market share. Ericsson has maintained a healthier balance sheet, and also benefited from foreign-exchange tailwind—it reports in Swedish kronor, but earns most of its sales in U.S. dollars, which have strengthened.

Since the closing of the Alcatel-Lucent deal in November 2016, Nokia shares have lost investors 14% after dividends, well behind Ericsson’s 79% return and the S&P 500 index’s 47%. Ericsson’s market value has grown to $27 billion, versus $19 billion for Nokia, even though Nokia’s $26 billion in sales last year eclipsed Ericsson’s $24 billion.

“I do think that Ericsson has executed better and is ahead in technology and therefore is a better company for 5G,” Leopold says. “Nokia has made mistakes, and they’ve upset customers and they’re behind. That said, I think an investor can make a bigger return investing in Nokia than in Ericsson….But we like both of these companies because of the 5G theme.”

He rates Nokia shares at Strong Buy with a $5.50 price target—potentially 60% upside from their recent $3.42. Leopold has an Outperform rating and $9 target on Ericsson, 10% above its recent $8.13.

While the carriers compete over customers, the companies that lease antenna space on cell towers can benefit from the industrywide shift to 5G without having to pick sides. The publicly traded cell tower firms have all converted to real estate investment trusts in recent years, and they’ve been remarkable outperformers, with the stock gains justified by fundamentals. It’s an enviable business: Profit margins are wide, recurring revenue is high, and future visibility is clear, given long-term contracts with annual escalators. Increasing demand for connectivity and data usage have required more antennas on more towers in more places—frequently with multiple carriers all renting space on the same tower. (Barron’s cited the towers in last week’s story about top real estate stocks.)

The largest player is American Tower (AMT), with a market value of $102 billion and nearly 180,000 sites in 19 countries. The REIT produced $7.6 billion in revenue and $3.5 billion in adjusted funds from operations, or AFFO, last year. Both revenue and AFFO have grown at a 13% annual clip over the past five years. The shares have returned 168% during that period, including a dividend that currently yields 1.9% annually—versus a 49% return for the S&P 500.

At a recent $230, American Tower trades for about 27 times Wall Street’s estimate of its per share AFFO for the next 12 months. That’s not cheap, but the tower REITs can expect activity to pick up in the coming years as carriers upgrade their equipment. Antennas for 5G are larger and heavier, meaning that they’ll generate more rent.

The carriers also need more equipment to transmit signals over the new radio waves, or spectrum, that they’ve paid billions to acquire for 5G. “That spectrum isn’t worth a hill of beans unless you spend to build it out,” says Wells Fargo analyst Jennifer Fritzsche.

The 5G tower opportunity goes well beyond those tall, unsightly structures on the side of the highway. New 5G signals will travel across higher frequencies than those used for 4G. Those spectrum bands can carry more information than lower-frequency bands, but the signals don’t propagate as far from antennas.

To keep 5G signals going, carriers are building a dense network of small cells, or individual antennas, to blanket urban areas. The No. 2 tower REIT, Crown Castle International (CCI), has chosen to focus on the small-cell opportunity. It has 40,000 macro towers, plus 80,000 miles of fiberoptic cable reaching a network of small cells. “Crown has very much skated to where they think the puck’s going, and that’s small cells,” says Fritzsche.

As they fill in their 5G networks, carriers’ spending is likely to flow toward small cells. Crown Castle stock trades for 24 times forward AFFO, and yields 3.2% annually.

Shares of SBA Communications (SBAC), the smallest of the big three tower REITs, carries the highest price tag, at 30 times next 12 month’s projected AFFO. The company has the sector’s fastest growth, which has been juiced by higher debt and stock repurchases.

The most significant tower growth, though, could come from international markets in coming years. American Tower has a bet big on India’s rapidly expanding wireless market, with mixed success so far. It also has a large presence in Africa and Latin America and in a few European countries through joint ventures. About 45% of its sales last year came from outside the U.S.

SBA’s largest international market is Brazil, and it owns towers across the Americas and in South Africa. Crown Castle operates only in the U.S.

The differing strategies might not matter for the stocks—rock-bottom interest rates, high recurring revenue, and a clear catalyst for growth keep all three attractive.

The big event on everyone’s mind is Apple’s (AAPL) unveiling of its next iPhone, due this fall; the company’s new lineup is widely expected to include at least one 5G model. Apple signed a new multiyear agreement with Qualcomm (QCOM) last year to supply 5G modems, putting aside a protracted legal battle and forking over billions of dollars in withheld licensing payments.

That speaks to the leadership of Qualcomm’s 5G modem technology, says UBS analyst Timothy Arcuri. “You’ve got a company that really doesn’t want to deal with Qualcomm being forced to,” he comments, “because of their technology.” (See Qualcomm interview on page 26.)

Apple ultimately endeavors to build its own modem, having purchased Intel’s (INTC) modem business last year. But, until then, Qualcomm’s presence in the iPhone will boost the chip maker’s revenue.

Beyond the iPhone, Qualcomm has an opportunity to take share in the RF business from incumbents, including Qorvo (QRVO) and Skyworks Solutions (SWKS).

Qualcomm’s RF offerings have become more competitive, Arcuri says, giving the company a more complete 5G product that it can bundle for customers that don’t want to deal with multiple vendors.

Qualcomm, Qorvo, and Skyworks are also best positioned to benefit from the coming of internet-connected devices. This so-called Internet of Things will lead to more devices needing more RF components.

The market might already appreciate the opportunity. Arcuri has Neutral ratings on all three stocks. He prefers Marvell Technology Group (MRVL), which supplies semiconductor components to the likes of Nokia and Samsung. Arcuri rates Marvell at Buy with a $29 price target, about 10% above recent levels.

The 5G rollout is coming at an awkward time, though the carriers, who have spent years laying the groundwork for it, say the Covid-19 pandemic hasn’t altered their timeline. That doesn’t mean consumers and businesses won’t have a change of heart about buying pricey smartphones.

Meanwhile, strained budgets are likely to make cities and municipalities think twice about sponsoring connected-city projects, and corporations have new priorities other than overhauling their networks.

5G is still coming, and it will ultimately change our lives. But it’s not going to happen overnight.