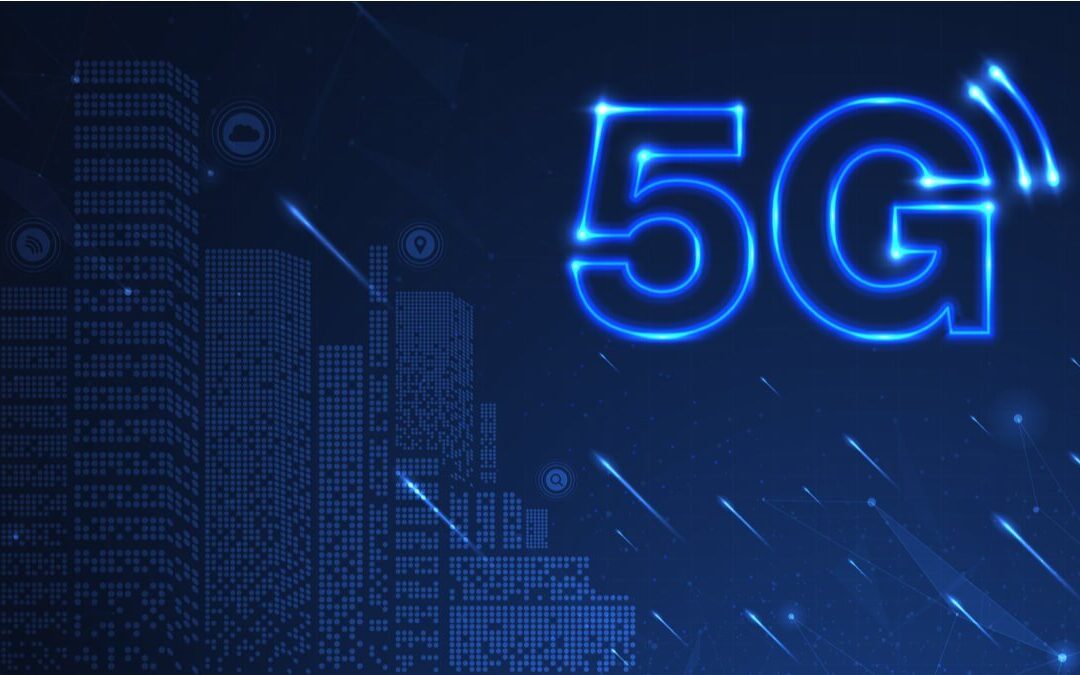 While the worst of the health pandemic seems to be behind us, the crisis has shed light on the importance of digitization and the urgency of reliable mobile and fixed networks for individuals and companies.

And regulators have been moving ahead with awarding radiofrequency bands, particularly for 5G technology.  The governments of the Dominican Republic and Peru were the latest to come up with details of their plans.

Regulator Indotel said that 5G technology could come into effect as early as January 2021 – an ambitious goal that would make the Caribbean nation the second Latin American market after Chile to award frequencies for 5G.

The announcement came after the country’s newly elected president, Luis Abinader (in photo below), called on Indotel to take the necessary steps to ensure the availability of the 700MHz and 3.3-3.4GHz bands for public tendering in 2021.

“We want to develop a deployment plan for 5G technology and broadband that is unprecedented in our history, a leap towards hyperconnectivity that will change the future of our country,” Abinader said in a press conference.

The president announced a decree urging Indotel to work on a new national policy for spectrum management. The decree also declares of “national interest” access to 5G and the productive use of information and communication technologies. 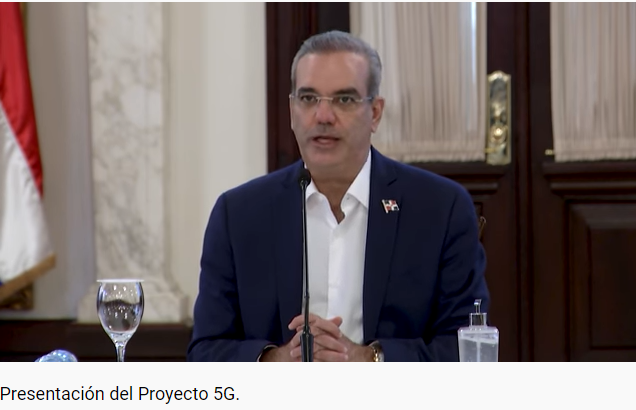 Following the presidential decree, Indotel held on Friday the first meeting to work on the 5G roadmap.

“The main objective of these working groups is to coordinate actions for the formulation and fulfillment of the national broadband plan, the clearing of the frequencies of the radioelectric spectrum to ensure the deployment of 5G networks and the entry into operation of the fiber optic unit of the Dominican transmission company ETED to reduce the digital divide in the country,” the regulator said in a statement.

According to Abinader, who took office in August, the COVID-19 pandemic shed light on the “great digital divide” that exists in the country.

Only 31.6% of Dominican households were connected to the internet, according to the latest survey.

The country is below the Latin American average for penetration of fixed and mobile networks.

Peru is working to have a spectrum tender for 5G technology in the first half of next year, said deputy communications minister Virginia Nakagawa. The country is considering awarding frequencies in the 3.3GHz-3.8GHz range (3.5GHz band) and the 24.2GHz-25.5GHz range (26GHz band).

Nakagawa said that before the end of this year public consultation on the channeling and use of the bands identified to implement the technology should be launched.

After that, in the first half of next year Peru’s investment promotion agency ProInversión is expected to release the final tender terms and carry out the tender itself. However, the minister estimates that 5G will only become a reality for users in Peru “in 2022 or 2023.”

Recently, Peru shortlisted three consultancies for a tender to help design its next spectrum auction, which will award frequencies in the AWS-3 (1.7GHz and 2.1GHz bands) and 2.3GHz bands. Both of these have been used for 4G and 4.5G but could also be used for 5G deployments. The qualified bidders are US-based Arthur D Little Services, Consorcio Perú Conectado and Germany’s Detecon International. 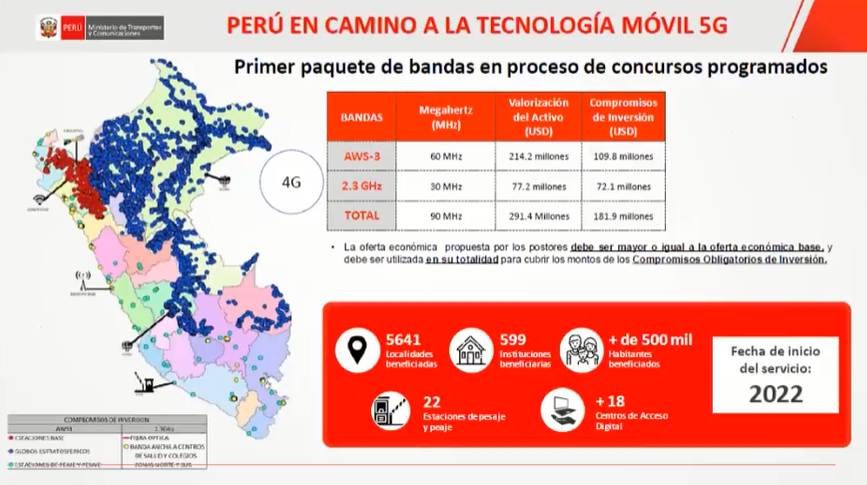 Chilean regulator Subtel postponed the opening date for bids in its 5G tender by one month.

The original start date for accepting bids was this Tuesday but citing a high level of interest the watchdog pushed back the submission period to begin on November 12 and conclude November 18. 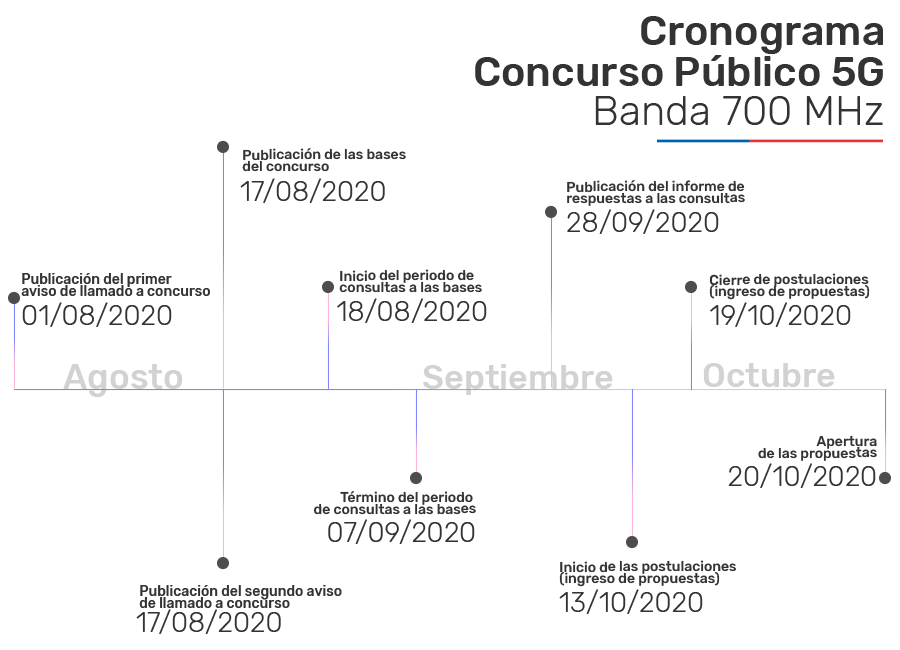 Despite the delay, Chile remains on track to become the first Latin American country to hold a tender for 5G frequencies.

Mexican regulator IFT is currently consulting on terms for awarding spectrum in the 800MHz, PCS (1.9GHz), 2.5GHz and AWS-3 bands, mostly for 4G.

The consultation period was extended by one month following telecom industry requests, now ending on October 21. After that, IFT will work on the feedback received to draw up the final auction terms. The IFT-10 tender, as it is known, involves 41 blocks of spectrum. It was expected to be concluded in the first half of next year.

However, a finance ministry proposal to raise annual spectrum fees in the 800MHz band starting next year, as well as creating new ones for 5G spectrum that has not yet been awarded, caused concern among mobile operators, potentially jeopardizing the tender process. Carriers are now trying to block the measure in congress.

The ministry’s proposal is part of a broader project to reform the federal right-of-use law that charges concessionaires for using government-owned assets such as water bodies, ports and spectrum, among others.  The finance ministry included the reform in the 2021 budget proposal it submitted to congress on September 8.

“We’re trying to sensitize the decision-makers about the negative impact that this measure has. Not only is it important to reverse the increase, but it’s necessary to lower spectrum costs,” Lucas Gallitto, head of public policies at the GSMA in Latin America, told BNamericas.

The GSMA, which represents the main mobile operators worldwide, is presenting its case to the lower house’s budget committee, and Gallitto will represent the entity.

Last year, the GSMA conducted a study showing that if spectrum prices in Mexico were in line with Latin America’s average, the country would have almost 15mn more mobile users, of which 10mn would use 3G and 5mn 4G, and internet speeds would be 66% faster.

Six operators expressed interest in Colombia’s next spectrum auction, results from a recent consultation held by the government to assess interest in new assignments show.  The ICT ministry (MinTIC) asked about interest in the 700MHz, 1.9GHz, 2.5GHz and 3.5GHz bands. Operators could also indicate how they preferred allocation and when.

Only ETB expressed interest in the 1.9GHz band, adequate for voice and broadband applications, especially via 4G. The state telco also preferred allocation in 2H22.

The 2.5GHz band, with high 4G transmission capacity, is eyed by Comcel, ETB, Partners and Colombia Telecomunicaciones (Telefónica). While ETB wants to start using the band in 2022, the other telcos prefer the second half of next year.

Finally, the 3.5GHz band, which is key for 5G, received most expressions of interest: from Comcel, state-run utility Emcali, ETB, Colombia Telecomunicaciones and Colombia Móvil (Millicom).

Emcali would like to use it in the first half of 2021, while Comcel prefers to wait until the second half.

ETB and Telefónica called for an assignment only in the second half of 2022. Millicom did not mention a timeframe.

Brazil’s regulator Anatel approved in August a proposal to consult the market on the use of the 1.9GHz, 2.5GHz and 39.5GHz bands for broadband services.

Considered a millimeter wave band (extremely high frequencies, above 24GHz), the 39.5GHz band has been increasingly used in several countries for applications in fixed wireless 5G and WiFi 6. The 1.9GHz and 2.5GHz bands, in turn, were meant for 3G and 4G technologies in previous tenders and the goal is that remaining lots be awarded in a “leftover” auction.

Brazil’s next spectrum auction, which will include frequencies for 5G, is expected to take place in the first half of next year. Communications minister Fábio Faria recently said he considers “May or June” as feasible dates.

The country plans to sell about 2GHz of spectrum in the 700MHz (leftovers from the 4G auction), 2.3GHz, 3.5GHz and 26GHz bands. Anatel claims the spectrum auction will be the biggest ever in Latin America.

The initial proposal of the regulator divides Brazil into 14 regions and suggests a sequential sale of frequencies.  Final tender terms, however, should be released only after the conclusion of tests on interference between mobile and satellite services that occupy the 3.5GHz band.