What does it mean for Colombia to have its first 5G network pilot? 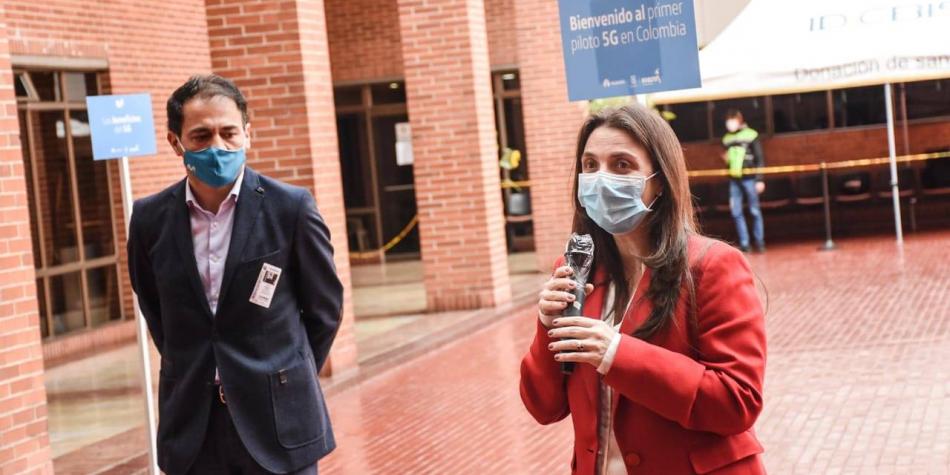 While the first trial began in Bogotá, Latin America is also moving in implementation.

The fastest connectivity standard will allow the temperature monitoring of more than 400 people in Bogotá in what is the first pilot of fifth generation networks in the country. As the 5G agenda picks up again, the region also has its own breakthroughs on the issue.

This 5G connection node, located in the Bogotá District Health Secretariat , will be the first of several tests that the MinTIC has planned and that are in process. This is a case in which thermographic cameras are used to help monitor the temperature of the people who work and transit in the Secretariat and the Public Health Laboratory.

The pilot, carried out by the operator Movistar and the network giant Huawei, started this week and received an operating permit for the next 6 months, extendable for the same period. This is a major step in the fifth generation network deployment plan that this administration has been advancing since the end of last year.

The wireless network, which uses frequencies in the 3.5 GHz band, brings higher speed, device connectivity, and lower latency (the response time) to communications. With this, the network will allow data processing at a speed of only 10 milliseconds. In proportion, the passage of information in 4G networks takes about 80 milliseconds. That difference is what fuels the hope that 5G will massify things like telemedicine or autonomous driving.

According to the ICT Minister, Karen Abudinen, at the launch event, “it is the first time that a project of this type has been carried out in the country, with which we will seek to protect the lives of Colombians.” The pilot plans not only to improve data transmission but also to allow visual and audible reports and alerts of possible cases of Covid-19.

While in the last two years countries such as South Korea and the US have launched their first commercial 5G services, the eventual arrival of the service in Colombia will still take time. However, the first pilot on the map designed by the MinTIC brings a tangible example of how these services operate and is seen as an opportunity to better understand the needs of the network, the cost estimation and the standards

According to Natalia Guerra, director of institutional relations, public affairs and regulation of Movistar Colombia, the national pilot was possible in large part due to the provision of the MinTIC, which enabled a more accelerated approval (of 10 business days) to tests that addressed the situation of the pandemic. In addition to that, Movistar has two more proposals pending.

The key to starting the tests will be that manufacturers, operators and customers will be able to closely observe the benefits of these technologies. The call for tests is still open by the MinTIC until May 29.

An example of the dimension, which is close to users is that if it is a question of downloading a 4k movie over the internet in 3G it would take more than 8 hours; in 4G, we talk about 5 minutes or more; but, in 5G, it could be in a matter of a single minute.

“While in 4G the transmission speed is up to 360mbps, in 5G we are talking about caps that reach 1GB”, explains Guerra. “The use of fifth generation networks will lead to the explosion of the internet of things and the internet of everything,” he said.

For Guerra, after this and the other tests to come, the results will make it possible to advance in a spectrum assignment with a better understanding of the sector’s needs. But “to be able to take advantage of the spectrum and work on the deployment, policies are needed and prices are not so expensive.”

In a similar position is Alejandro Adamowicz, Director of Technology of the international association of telecommunications operators GSMA. According to the executive, the arrival of these tests to the country is great news.

However, the race, at least at the regional level, already has exponents such as Brazil, where more than 10 pilots have been made since last year, and countries such as Chile, Peru and Mexico with their own examples. According to figures from the 5G Americas group, during 2019 at least 30 5G tests were carried out in 12 countries.

An important part that the GSMA executive highlights is that launching pilots specifically at this juncture can accelerate adoption and even lead to economic recovery paths.

According to Adamowicz, no country has taken the next step: allocating spectrum. To move from testing to services, there are investment and governance decision needs.

“I am convinced that 5G is going to give Latin America a huge leap in productivity and that in the post-pandemic it can accelerate economic recovery. That is why what happens in Colombia is so important. These examples encourage more actors and in time we will see how the wheels start to roll, ”he said.

The executive’s approach is that if potential uses and business cases are advanced soon, once the post-pandemic outlook is further defined, it will be sectors such as health, agriculture or mining that will begin to experiment with the benefits of this technology such as cost reduction in production times.

For example, in the agriculture sector, the use of 5G to collect information from sensors in the soil to measure humidity or temperature could lead farmers to focus on more opportune times for planting. Information on a large scale gives tools for decisions.

Beyond that, another great potential is that of remote monitoring. In support of technologies such as virtual reality, it is possible to make observations in areas of risk or difficult access, such as the contexts faced by the oil or mining industry. With 5G, fast transmission and the ability to connect several devices simultaneously would even allow the protection of human lives who are dedicated to collecting data under these conditions.